Yesterday was the Northumberland and Tyneside heat and the first event of the year.

The event is the first of three heats, with later events taking place in Durham, Sunderland and South Tyneside; and on Teesside, before the winners from each heat then compete in the overall regional final at Hardwick Hall, near Sedgefield, on September.

Tonight, businesses from around the region will compete in nine categories in the Northumberland and Tyneside taking place at the Hilton Newcastle Gateshead.

Vying for the coveted Company of the Year title in the Northumberland and Tyneside heat are The Doxford Group, Newcastle Building Society, Opencast Software and Port of Blyth. 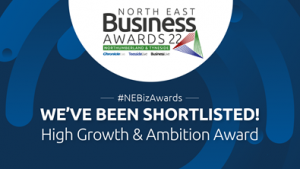 Newcastle Building Society has been named Tyneside and Northumberland Company of the Year as the awards returned to a live event for the first time in two years.

The first heat of this year’s North East Business Awards were held at the Hilton Newcastle Gateshead, with nearly 30 companies vying for prizes.

Newcastle Building Society took the top prize of Company of the Year, having earlier also won the apprenticeships, training and skills award.